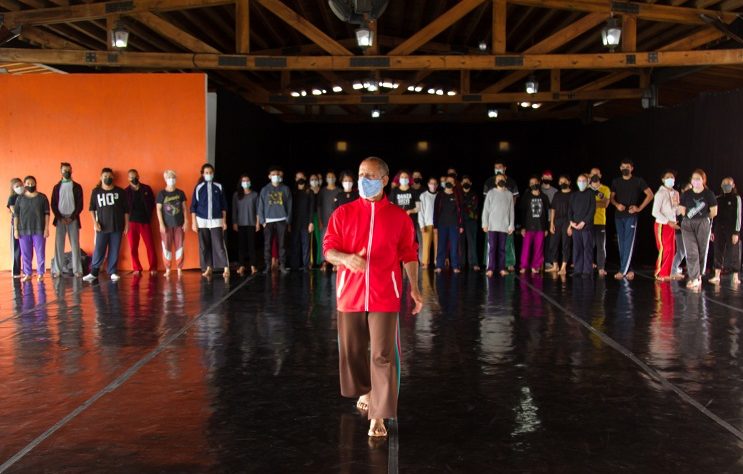 The third edition of ATLAS Mexico Festival was held from august 2nd to the 13th, this is an international contemporary dance event that takes place at the touristic center Parador de Sangre de Cristo, located 45 minutes away from Guanajuato city, Mexico. Despite the sanitary context, the festival was successfully completed following a very strict protocol of sanitary restrictions, and it therefore became an international reference for dance festivals that have managed to be completed without any interruptions due to COVID whatsoever.

In words of its Director Francisco Córdova, ATLAS is an intimate training retreat that is divided into two sections: one educational and other devoted to performing skills. In an interview with Fluir he says: “ this is a laboratory/retreat in which we interact within a bubble, teachers lead 100% pedagogical processes with the participants, and precisely, what interests me the most of this format of festival is that by working on a body oriented research for such long periods of time the body itself is actually conditioned to understand the guest teacher’s proposals, its foundations and personal investigation; this has always happened to me and I like it because they are researchers who have developed personal studies of the body and its movement that are relevant in diverse parts of the world and have shaped several generation’s dance thought processes towards other forms of creation”. The Festival gathered 40 professional dancers from Mexico, Argentina, Uruguay, Chile, Venezuela, the USA, Canada and Spain. The international teachers of this edition were David Zmabrano (Venezuela-Belgium), Jeremy Nelson (New Zealand- USA) and Horacio Macuacua (Mozambique).

Practicing our bodies from nature

An outstanding feature of the festival is its location: “this is a mountain retreat, with an extraordinary landscape, where you can be completely isolated from society, industrialization, the forever noisy movement, from virtuality, since we are also away from the internet for the entire 15 days of the festival, and this makes interactions more direct, participants focus on their bodies, this is like making a real intensive certification. It involves many hours of training but also of actual interaction with the creatives. Therefore, being part of such a place and context is an inspiration. At other festivals you take class in studios or theaters, which is pretty conventional for such events.  This is something that we loved from the very beginning: nature itself. The encounter with nature, and there is nothing better than practicing our bodies from nature”.

The attendees have nothing to worry about other than training, researching and digging deeper, ATLAS is all inclusive, it is a 15 day long retreat that includes accommodation, meals, classes, interactions, talks and preforming practices. “It’s a full experience package, this is not a common thing around the world, we practically adopt the participants for 15 days, they become our kids”.

In addition to the workshops, the festival featured a special performance at the Cervantes Theater in Guanajuato, where David Zambrano and Horacio Macuacua presented solo pieces based off of improvisation.

Also, in collaboration with the Center for the Arts in Guanajuato, the Festival had for the first time a space for open style urban battles: “IMPROVE FATIGUE BATTLES”. It gathered urban dancers from several states of the Mexican Republic, such as Mexico City, Jalisco, Veracruz, Michoacán, among others. The first place of the battles was won by JEWELS, the second place was for Funky Maya and the third for the artist Kram River.

There is a clear intention to bring to our region the knowledge and practices of creators that otherwise would be difficult to approach, to bring to our country body investigations that are not developed in our schools or dance centers. Francisco Córdova says “The fact that this is developed in Latin America and that we are able to invite these teachers creates a meeting point for people who are interested in such material and investigations. I’m in no way against any technique, method or anything, however, since these are methods that propose other ways of thinking or even performing, many times people are scared of them or criticize them, and that is normal. I happen to have the necessity of making a Festival in Mexico, making of it a meeting point to bring people together and plant the seed in those who are interested in contextualizing that kind of research, not only by taking a workshop, but by exposing and making viral other kinds of research than the ones we are used to.”

COVID did not limit our dream of dancing

Making a dance festival in such a context involves a lot of organization and responsibility, but mostly a huge human and economic risk. The festival was carried out to completion following all the measures and with absolutely no contagions. About this the Director says: “we are very proud and this is as major achievement, being one of the few festivals in the world that has managed to finish with no outbreaks, running COVID tests and following all the measures and protocols. We are evidently very happy, proud and this represents a winning medal for us. It upsets us a lot having to cancel, having teachers canceling, however, we were so confidently and safely prepared that COVID did not limit our dream of dancing. It did not limit the dream  of achieving an edition where we were able to meet in person, which is the purpose of the festival and dance itself: physical contact. After a pandemic, meeting and being able to look at each other in the eyes and actually making our practice, despite all the difficulties, was beautiful. I think it was one of the things that brought us all back to life.”